The HBO/BBC drama Gentleman Jack was inspired by was inspired by Nature's Domain: Anne Lister and the Landscape of Desire and its companion Female Fortune. Gentleman Jack tells the story of Anne Lister in the 1830s, a time when Anne Lister powerfully came into her own. Pennine Pens was delighted to publish Nature’s Domain: Anne Lister and the Landscape of Desire in 2003. This remarkable book has remained in print for sixteen years. So here now for the very first time is a new eBook edition ~ making this influential Anne Lister classic readily available across the world to everyone with a Kindle, iPad or other eBook device. Anne Lister (1791-1840) was a scholar and traveller, a landowner and lesbian. Her diaries run to over four million words, much of it written in her own secret code & recording in vivid detail her affairs with other women. Anne inherited the Shibden Hall estate in Halifax and, as a member of the landed gentry, had a strong the sense of her dynastic entitlement. Nature’s Domain tells the dramatic story, previously unknown, of Anne Lister in 1832 ~ eight intense months of her life, from April to New Year’s Eve. In May 1832 aged 41, Anne arrived back home to ancient Shibden Hall, betrayed once again by yet another woman’s marriage plans. Despondent, she knew her romantic youth was over. Almost all her female friends had married and settled. She held melancholy spirits at bay by immersing herself for solitary hours in Shibden’s well-stocked library & planning changes to the estate. She must remodel herself too. Certainly she must find a companion for life. Then a chance re-acquaintance with neighbouring heiress changed her life ~ forever. Anne Lister focussed all her charismatic charm on deft courtship of this lonely young woman. And Shibden was re-moulded into her ‘landscape of desire’. Here in the ‘moss hut’ she had built, her flattering seduction could unfold ~ all away from prying eyes. 1832 was also a year of tremendous political tumult. The great Reform Act might excluded Anne Lister as a woman from the parliamentary franchise. But her tenants were not. With no secret ballot yet, she became a powerful player, door-stepping voting tenants with determined skill. This dramatic story, hitherto unknown and never before unpublished, unfolds to New Year’s Eve 1832. It records how Anne Lister’s indomitable will enabled her to mould nature to her own powerful desires. Jill Liddington is co-author of One Hand Tied Behind Us (1978) which became a suffrage classic. She is author of Presenting the Past: Anne Lister of Halifax 1791-1840 (1994) and of Female Fortune: the Anne Lister diaries 1833-36 (1998). She is an Honorary Research Fellow at the University of Leeds, and lives in Mytholmroyd near Halifax. 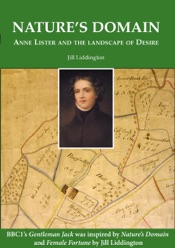