The Oxford History of Mexico is a narrative history of the events, institutions and characters that have shaped Mexican history from the reign of the Aztecs through the twenty-first century. When the hardcover edition released in 2000, it was praised for both its breadth and depth--all aspects of Mexican history, from religion to technology, ethnicity, ecology and mass media, are analyzed with insight and clarity. Available for the first time in paperback, the History covers every era in the nation's history in chronological format, offering a quick, affordable reference source for students, scholars and anyone who has ever been interested in Mexico's rich cultural heritage. Scholars have contributed fascinating essays ranging from thematic ("Faith and Morals in Colonial Mexico," "Mass Media and Popular Culture in the Postrevolutionary Era") to centered around one pivotal moment or epoch in Mexican history ("Betterment for Whom? The Reform Period: 1855-1875"). Two such major events are the Mexican War of Independence (1810-1821) and the Mexican Revolution (1910-1920), the subjects of several essays in the book. Publication of the reissued edition will coincide with anniversaries of these critical turning points. Essays are updated to reflect new discoveries, advances in scholarship, and occurences of the past decade. A revised glossary and index ensure that readers will have immediate access to any information they seek. William Beezley, co-editor of the original edition, has written a new preface that focuses on the past decade and covers such issues as immigration from Mexico to the United States and the democratization implied by the defeat of the official party in the 2000 and 2006 presidential elections. Beezley also explores the significance of the bicentennial of independence and centennial of the Revolution. With these updates and a completely modern, bold new design, the reissued edition refreshes the beloved Oxford History of Mexico for a new generation. 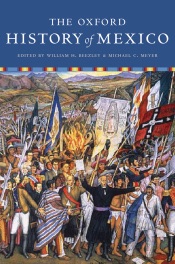