This insightful, eye-opening guide reveals the methods and the madness behind the new coach of the San Francisco 49'ers. During his four years as football coach at the University of Oregon, Chip Kelly led the previously unheralded Ducks to a 46-7 record. But Chip Kelly's method goes a lot deeper than his high-risk defense and lightning-fast, no-huddle offense. What is behind Chip's astonishing success? It's a lot more than just plays and tactics. Now that he's run the NFL gauntlet as head coach of the Philadelphia Eagles and emerged out the other side to come back to the west coast, this book looks at the remarkable philosophy and innovative management strategies that Chip Kelly uses to build elite teams-strategies that every leader or business manager can employ to make their own brand a champion.

"He just thinks so differently than anyone I've ever met."—John Neal, Oregon assistant coach

"Saltveit lays out a clear picture of how Kelly operates."—Bob Ford, PHILADELPHIA INQUIRER 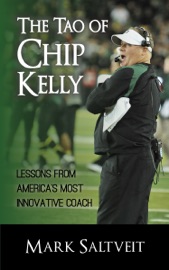