The End of the Night, one of many classic novels from crime writer John D. MacDonald, the beloved author of Cape Fear and the Travis McGee series, is now available as an eBook.

They’re known as the notorious “Wolf Pack”: three men and a beautiful girl on a cross-country terror spree, a coast-to-coast rampage of theft, destruction, and murder. But who are they? Where have they come from? And what motivates their terrifying capacity for mayhem? Somewhere in the grotesque inner world of four drug-crazed young sadists, a violent lust lies hidden between mischief and madness . . . waiting unseen for some innocent and helpless stranger.

“The great entertainer of our age, and a mesmerizing storyteller.”—Stephen King

“My favorite novelist of all time.”—Dean Koontz

“To diggers a thousand years from now, the works of John D. MacDonald would be a treasure on the order of the tomb of Tutankhamen.”—Kurt Vonnegut

“A master storyteller, a masterful suspense writer . . . John D. MacDonald is a shining example for all of us in the field. Talk about the best.”—Mary Higgins Clark 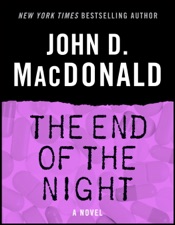