Organized chronologically, the book has chapters devoted to each of the show's eight seasons, along with production milestones and character biographies, as well as occasional lists, recipes, and snippets of dialogue.

Originally published to celebrate the 40th anniversary of The Andy Griffith Show, this book features nearly 300 beautifully reproduced photographs in both color and black and white, the majority of which have never before been published. Mayberry Memories is the ultimate keepsake memento for fans who have enjoyed everything Mayberry for four decades. 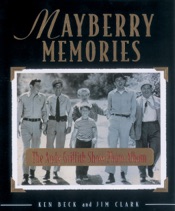