Two nuclear wars. Three asteroids. Demonic madness that kills one third of the world’s population. Into this, a savior will rise, cloned from Christ. It’s not fiction. It’s prophecy.

The Messiah of the New Age. His coming is prophesied by more than a dozen major religions. Cloned from live cells of Jesus Christ found on the Shroud of Turin, Christopher Goodman was born into the most turbulent time in human history. Mentored by former UN Assistant Secretary-General Robert Milner, Christopher rises in position and power, and displays remarkable wisdom and compassion. But through disjointed bits of dreams that sometimes haunt him, Christopher reveals significant troubling errors in the biblical record of Jesus’ life.

Soon the reason for Robert Milner’s interest in Christopher becomes clear: the world is about to undergo a time of destruction and chaos darker than any in history, with impending nuclear war merely a faint precursor. Milner explains that without Christopher, humanity will not long survive. Under Christopher’s leadership, however, mankind stands on the threshold of a final great evolutionary leap that will bestow on the human race god-like powers. This is the reason, Milner says, that Christopher was born.

In Israel, an unexpected threat to Christopher’s ascension is growing: two men, possessed of incredible supernatural powers, one claiming to be the 2000-year-old Apostle John, the other an apostate Hasidic rabbi named Saul Cohen. Together, the men lead an outlawed cult of 144,000 followers, each branded with the names Yahweh and Yeshua on their foreheads.
------------
James BeauSeigneur is a former intelligence analyst who has worked for the National Security Agency (NSA) and the Defense Intelligence Agency (DIA). As an author, he has worked with the Department of Homeland Security by serving on “Terrorist Red Cells” to speculate on possible terrorist targets and tactics. He is a former newspaper publisher, who also taught political science for two years at the University of Tennessee in Knoxville. He is a member of Mensa and the Association of Former Intelligence Officers. His background brings a special focus on scientific detail and political realism to his novels.
------------

"Undeniably riveting...daring...wonderfully creepy...Readers will be enthralled by the author's science-fortified vision of the Apocalypse."
--Publishers Weekly

"This trilogy is nothing short of incredible. These end times books will knock your socks off."
--Ted Dekker, best-selling author of Forbidden, The Priest's Graveyard, and Immanuel's Veins

"Finally, out of the ghetto of the evangelical subculture, comes a refreshing, well thought out, and methodically researched look at the end of the age. ...And not since, C.S. Lewis have we seen such creativity and imagination in its presentation. Bravo! More!"
--Jeremy Nordmoe, Vanderbilt University Library 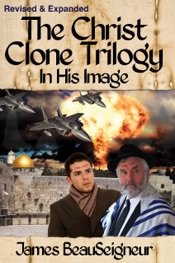