This judicious history of modern Mexico's revolutionary era will help all readers, and in particular students, understand the first great social uprising of the twentieth century. In 1911, land-hungry peasants united with discontented political elites to overthrow General Porfirio Díaz, who had ruled Mexico for three decades. Gonzales offers a path breaking overview of the revolution from its origins in the Díaz dictatorship through the presidency of radical General Lázaro Cárdenas (1934-1940) drawn from archival sources and a vast secondary literature.

His interpretation balances accounts of agrarian insurgencies, shifting revolutionary alliances, counter-revolutions, and foreign interventions to delineate the triumphs and failures of revolutionary leaders such as Francisco I. Madero, Pancho Villa, Emiliano Zapata, Alvaro Obregón, and Venestiano Carranza. What emerges is a clear understanding of the tangled events of the period and a fuller appreciation of the efforts of revolutionary presidents after 1916 to reinvent Mexico amid the limitations imposed by a war-torn countryside, a hostile international environment, and the resistance of the Catholic Church and large land-owners. 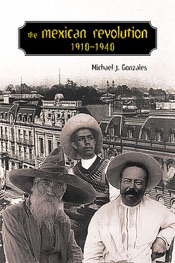