“This is a delightful and funny adventure ... It is also lonely, dangerous and frightening.”—THE LONDON TIMES

He survived a terrifying crocodile attack off Australia’s Queensland coast, blood poisoning in the middle of the Pacific, malaria in Indonesia and China, and acute mountain sickness in the Himalayas. He was hit by a car and left for dead with two broken legs in Colorado, and incarcerated for espionage on the Sudan-Egypt border.

The first in a thrilling adventure trilogy, Dark Waters charts one of the longest, most gruelling, yet uplifting and at times irreverently funny journeys in history, circling the world using just the power of the human body, hailed by the London Sunday Times as “The last great first for circumnavigation.”

But it was more than just a physical challenge. Prompted by what scientists have dubbed the “perfect storm” as the global population soars to 8.3 billion by 2030, adventurer Jason Lewis used The Expedition to reach out to thousands of schoolchildren, calling attention to our interconnectedness and shared responsibility of an inhabitable Earth for future generations.

“Often funny and irreverent, always frank and authentic,
Lewis’s first volume of The Expedition series is also marked by the thrills of a first-rate adventure.”—FOREWORD REVIEWS

“Skating through Alabama with long hair, duct tape on the nipples, and women’s culottes … What were you thinking?”—JAY LENO, The Tonight Show

“A riveting true-life adventure as inspiring as it is thrilling.”—UTNE READER

“An extraordinary expedition on an epic scale.”—BEN FOGLE, television presenter and adventurer

“Truly a tale for our time. You really smell, taste and breathe this
journey in a way that is only possible by travelling more slowly.”—ROYAL SCOTTISH GEOGRAPHICAL SOCIETY 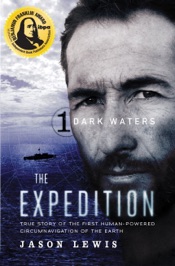