#6 in the Saxon mystery series. Saxon is hired to find the missing wife of an aging Borscht Belt comedian. Nappy Kane is a dinosaur, telling stale jokes about women drivers. His career is on the rocks, his bank balance is dwindling—even his agent is turning his back on him. But what broke the old comic’s heart was when his wife of less than a year disappeared—along with her clothes, her jewelry, and her new car. Saxon, hired to find her, learns that Doll Kane was a mail-order bride, chosen from a selection offered to him by a rather mysterious “agency.” Following a lead provided by a Chinese-American cabaret singer, Saxon tracks down the mail-order agency in a small town in northern California. Accompanied by his adopted son, Marvel, he finds the agency, run from a massage parlor, not only suspicious but dangerous. When he uncovers a murder, Saxon has to protect himself—and Marvel. But he’s surprised to discover that though Marvel is still a teenager, when the chips are down, he’s a good man to have around. 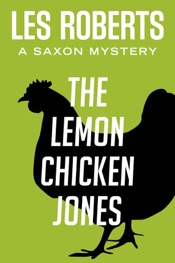