After the film in her camera is mysteriously destroyed at a small-town festival, reporter Bernice Kreuger knows she’s found something worth covering up. She brings the investigation to her boss, Marshall Hogan. Along with the local pastor of a struggling church, Hank Busch, they find something much bigger than they expected—a demonic plot to enslave their town and, eventually, the world.

The tiny college town of Ashton becomes the unlikely battleground in a cosmic clash between good and evil. Unseen by the human protagonists, armies of angels and demons wage war against one another in the spiritual realm for the souls of the people of Ashton. Up against supernatural forces, the future of the town seems bleak – but the power of prayer might be able to influence the outcome of the fight.

This fast-paced thriller birthed an entirely new genre, setting the standard for spiritual suspense. It has since sold over 2 million copies worldwide, sparking a renewed interest in the concept of spiritual warfare. 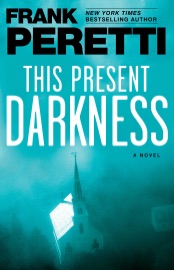