Walt Whitman was born on Long Island, New York in 1819.After a generally unhappy childhood he went to work in the printing trade and teaching with little success.
After years of different jobs on newspapers ,Whitman resolved to become a poet publishing his own work Leaves of Grass in 1855.
This work was on the whole well received and was praised by fellow poet Ralph Waldo Emerson. There was however considerable criticism of the sexual nature of some of the poems.
At the beginning of the Civil War, Whitman thinking his brother was dead made his way to the battlelines which led him to volunteer as a nurse in the army hospitals. This had a profound effect on his writing and life.
Whitman for the rest of his life was sought out by writers and poets who recognised his talent.
He died of pneumonia in 1892.
His bohemian lifestyle and honest portrayal of love for men and women endeared him to later generations who have raised Whitman to the position of one of America’s greatest poets. 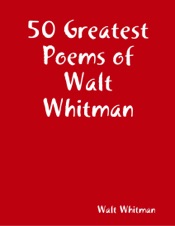