Mexico is in a state of siege. Since President Felipe Calderon declared a war on drugs in December 2006, more than 38,000 Mexican have been murdered. During the same period, drug money has infused over $130 billion into Mexico's economy, now the country's single largest source of income. Corruption and graft infiltrate all levels of government. Entire towns have become ungovernable, and of every 100 people killed, Mexican police now only investigate approximately five.

But the market is booming: In 2009, more people in the United States bought recreational drugs than ever before. In 2009, the United Nations reported that some $350 billion in drug money had been successfully laundered into the global banking system the prior year, saving it from collapse.

How does an "extra" $350 billion in the global economy affect the murder rate in Mexico? To get the story and connect the dogs, acclaimed journalist John Gibler travels across Mexico and slips behind the frontlines to talk with people who live in towns under assault: newspaper reporters and crime-beat photographers, funeral parlor workers, convicted drug traffickers, government officials, cab drivers and others who find themselves living on the lawless frontiers of the drug war. Gibler tells hair-raising stories of wild street battles, kidnappings, narrow escapes, politicians on the take, and the ordinary people who fight for justice as they seek solutions to the crisis that is tearing Mexico apart. Fast-paced and urgent, To Die in Mexico is an extraordinary look inside the raging drug war, and its global implications.

John Gibler is a writer based in Mexico and California, the author of Mexico Unconquered: Chronicles of Power and Revolt (City Lights Books, 2009) and a contributor to País de muertos: Crónicas contra la impunidad (Random House Mondadori, 2011). He is a correspondent for KPFA in San Francisco and has published in magazines in the United States and Mexico, including Left Turn, Z Magazine, Earth Island Journal, ColorLines, Race, Poverty, the Environment Fifth Estate, New Politics, In These Times, Yes! Magazine, Contralínea and Milenio Semanal.

"Gibler's front-line reportage coupled with first-rate analysis gives an uncommonly vivid and nuanced picture of a society riddled and enervated by corruption, shootouts, and raids, where murder is the 'most popular method of conflict resolution.' . . . At great personal risk, the author unearths stories the mainstream media doesn't—or is it too afraid—to cover, and gives voice to those who have been silenced or whose stories have been forgotten."—Publishers Weekly, starred review

"Gibler argues passionately to undercut this 'case study in failure.' The drug barons are only getting richer, the murders mount and the police and military repression expand as 'illegality increases the value of the commodity.' With legality, both U.S. and Mexican society could address real issues of substance abuse through education and public-health initiatives. A visceral, immediate and reasonable argument."—Kirkus Reviews

"Gibler provides a fascinating and detailed insight into the history of both drug use in the US and the 'war on drugs' unleashed by Ronald Reagan through the very plausible—but radical—lens of social control. . . . Throughout this short but powerful book, Gibler accompanies journalists riding the grim carousel of death on Mexico's streets, exploring the realities of a profession under siege in states such as Sinaloa and just how they cover the drugs war."—Gavin O’Toole, The Latin American Review of Books 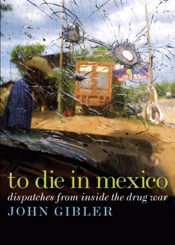