Millions of TV viewers have known Lou Dobbs for years as the Walter Cronkite of economics coverage, and now the anchor has become the preeminent champion of the common man and the good of the national interest, who tells uncomfortable truths in a voice that can't be ignored. In this incendiary book, he presents a frontline report on the betrayal of America's middle class by interests that range from rapacious corporations to an out-of-touch political elite. The result is not only lost jobs but also dysfunctional schools and unaffordable health care. But War on the Middle Class also outlines a bold program for change. As essential as it is infuriating, this book furnishes the talking points for the national debate on income and class. 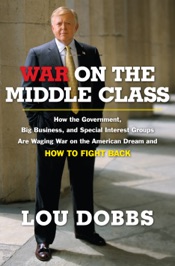