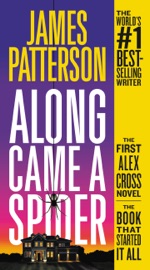 A family of three brutally murdered in the projects of Washington, D.C.

The thrill-killing of a beautiful elementary school teacher.

A psychopathic serial kidnapper/murderer who calls himself the Son of Lindbergh. He is so terrifying that the FBI, the Secret Service, and the police cannot outsmart him - even after he's been captured.

Gary Soneji is a mild-mannered mathematics teacher at a Washington, D.C., private school for the children of the political and social elite. He's so popular that the kids all call him "Mr. Chips." And he's very, very smart. Growing up, he always knew he was smarter than the rest of them - he knew that the Great Ones always fooled everybody. He kidnaps Maggie Rose, the golden-haired daughter of a famous movie actress, and her best friend, Shrimpie Goldberg, the son of the secretary of the treasury, right out from under the noses of their two Secret Service agents. But Gary Soneji is not surprised at his skill. He's done it before. Hundreds of times before.

Alex Cross is a homicide detective with a Ph.D. in psychology. he looks like Muhammad Ali in his prime. Cross works and lives in the ghettos of D.C. He's a tough guy from a tough part of town who wears Harris Tweed jackets and likes to relax by banging out Gershwin tunes on his baby grand piano. He has two adorable kids of his own. They are his own special vulnerabilities.

Jezzie Flanaganis the first woman ever to hold the highly sensitive job as supervisor of the Secret Service in Washington. Blond, mysterious, seductive, she's got an outer shell that's as tough s it is beautiful. She rides her black BMW motorcycle at speeds of no less than 100 mph. What is she running from? What is her secret?

Alex Cross and Jezzie Flanagan are about to have a forbidden love affair-at the worst possible time for both of them. Because Gary Soneji, who wants to commit the "crime of the century," is playing at the top of his game. The latest of the unspeakable crimes happened in Alex Cross's precinct. They happened under the protection of Jezzie Flanagan's men. Now Soneji is at large again, still wreaking havoc.

Alex Cross must face the ultimate test as a psychologist: how do you outmaneuver a brilliant psychopath? Especially one who appears to have a split personality - one who won't let the other half remember those horrific acts?

Soneji has outsmarted the FBI, the Secret Service, and the police. Who will be his next victim?

Gary Soneji is every parent's worst nightmare. He has become Alex Cross's nightmare. And now, reader, he's about to become yours.