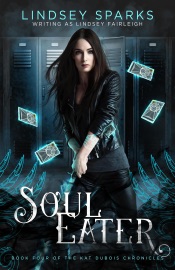 Humans know immortals live among them, and the world is forever changed...

Kat Dubois saved the human world from a deadly virus…and she couldn't be more miserable. Her life as she knew it is over. She has become a prisoner held captive in a gilded cage, courtesy of her newfound fame. She spends her days training with her sword, straining to control her ever-increasing otherworldly powers, and dreaming of the good old times.

Until her dreams start showing her grim visions of the future. A malicious evil is haunting a nearby high school, and according to her charmed deck of tarot cards, Kat may be the only person who can stop it. She's forced to step out into the world once more. The fate of humanity depends on her swift action. But this time, she may have to sacrifice more than her life to save the world…

Soul Eater is the fourth book in the Kat Dubois Chronicles, a tough-girl urban fantasy series set in Seattle, WA. If you like intense action, gritty characters, unconventional magic, and Egyptian mythology, then you'll love this unique, fast-paced adventure!

MORE BOOKS IN THE ECHO WORLD: