iOS 14, iPadOS 14, tvOS 14, and watchOS 7 for Users and Developers somewhat mirrors macOS Big Sur in that there are some design tweaks like the new Widgets and your ability to place them on the home screen for device running iOS, the new App Library system, which can help you organize your home screen. Along with the home screen changes, search and Siri have seen some improvements as well, and those are covered. Safari can now help keep you informed about who is tracking you across the web.

Communications is a big part of today’s society, so the updates to Messages is covered, and there is a whole new help to help you translate text, called the Translate app. Users will be able to learn about the new updates to Notes, Reminders, and Maps. If you prefer to handwrite items there is a new feature just for you called called Scribble, which will take your handwriting and covert it into text.

Health is a huge topic and there have been some big changes like the renamed Fitness app on the iPhone and a way of tracking Sleep on the Apple Watch. These are both covered along with updates to Face ID and masks, as well as new ways to protect your hearing. The Music and Home apps have been slightly changed and updated and the Shortcuts app gets some new tricks to help automate things even better than before.

Developers will learn all about Apple Silicon, because their iOS and iPadOS apps can run natively on Macs running Apple Silicon. Along with Apple Silicon, developers can learn about changes to Xcode, the new Swift, SwiftUI, and Swift Packages, as well as how to implement WidgetKit, some things to keep in mind about AppClips, how to implement the new Color Picker and how to support PencilKit and Scribble with their custom interfaces. 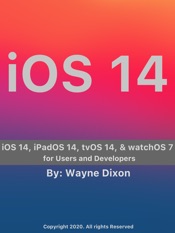