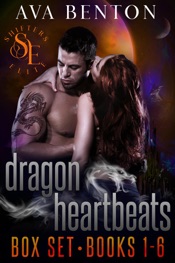 Dragon shifters and their mates heat up the pages in these sweltering romances.

Pierce
A group of dragons traveled from Scotland to the New World a millennium ago to guard a treasure that none could know of. Their homes and lives are hidden from the world of humans and supernatural beings.
Until Pierce saves the life of a woman during an avalanche. And now he's put the entire legacy on the line.
Jasmine isn't your average girl. She's a part of the fae. And now some damned dragon gave her his blood to heal her. Didn't he realize that dragon's blood is toxic to the fae?
His dragon brethren don't care if she lives or dies—actually, they'd just as soon as uncomplicate matters and see her dead.
But that's not so easy for her or the dragon that saved her.

Smoke
Alina may have saved the mate of a dragon, but that didn't make her the friend of any dragons.
And the feeling is mutual. The dragons have no used for her either.
Except for Smoke.
This hunky powerful dragon has decided he has to have the fae healer as his mate. Come hell, high water, dragons, or fae.

Cash
Iron is kryptonite to Cash and his dragon shifter clan. He offers to be the guinea pig in a laboratory to help them overcome their weaknesses.
Unfortunately, Cash didn't count on meeting a sexy doctor called Carissa.
Carissa's no stranger to shifters. Her cousin has hooked up with one of Miami's Everglade shifters. But she has no clue that there's such a thing as dragon shifters. She thinks she's helping out an average, run-of-the-mill wolf, bear, or tiger shifter. And Cash doesn't tell her his secret.
Then again, Carissa's got a secret of her own. Her nephew has been kidnapped. The only way she can get him back is if she delivers the blood of the shifter she's supposed to be finding a cure for.

Fence
Fence is on a mission. Returning to Scotland to find out what happened to the dragons. The old country is so very different than it used to be.
What he discovers in Scotland is alarming. No bodies just signs of a struggle.
The other thing he discovers?
An American girl who proves a distraction to his mission.
The last thing Ciera expected to find when she went to Scotland was a dragon shifter.
No, make that the last thing she expected was to fall in love with one.

Gate
A dragon heartbeat reveals the Scottish dragons are still alive and the Appalachian dragons go on a mission save their kin.
One little detail they didn't count on, though. A certain brunette firecracker of a stowaway who's hell-bent on proving herself, and proving her mother wrong. Said firecracker's mother? None other than the formidable Mary.
Poor Gate, he's in for a hell of an adventure, and that's before the mission even begins.

Miles
Miles has watched all the dragons in his Appalachian clan find their mates. Now he's flying solo.