She's got her guard up.

Detective Avery Dahl finally has her life back on track after a painful divorce. She's not going to risk her heart again, especially to a sexy veteran with heartbreak written all over him. Due to extenuating circumstances at an upcoming family wedding, she reluctantly agrees to bring him as her fake boyfriend—and soon realizes her mistake. Because Mason is as lethal with seduction as he is with a weapon, and keeps pushing her boundaries until her carefully constructed walls begin to crumble. Her instinct is to push him away, but when a mysterious enemy targets her, Avery has a choice to make. Face it alone, or take a risk and let him in.

He's determined to get past it.

After a horrific accident ended his military career, Mason Gallant has struggled to fit into the civilian world. Now that he and his buddies are opening a business together in Rifle Creek, he's finally found his footing again. But he never counted on meeting a woman like Avery. He can't stop thinking about her, so when she needs help, he steps up. Except posing as her boyfriend makes things even worse—because he soon realizes he wants way more than just her body. Now that he's seen the caring, sensual woman inside the tough cop, he wants to protect her from whoever is threatening her. As the attraction between them heats up, the danger escalates. Mason must prove to her that she can trust him with her heart as well as her life—or risk losing her to the bullet of a stone-cold killer. 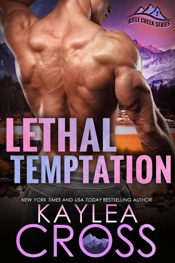