iOS 13 and iPadOS 13 are huge releases. There is an all new Dark Mode, Apple’s new gaming service Apple Arcade, an all new way to control iOS and iPadOS with just your voice, some updates to Screen Time and changes around Maps, particularly on the iPad. We also cover the updates to the Camera, Photos, and Notes.

iPadOS is a new operating system from Apple designed specifically for the iPad. In this we cover the big updates to Safari and its Desktop-Class browsing, the ability to use your iPad as a second screen on your Mac using SideCar, some big changes with Files including the use of external storage, and changes to Swift Playgrounds.

For those Apple TV users there is an all new Control Center, some new video previews, updated screen savers and the ability to connect Xbox One and Playstation 4 Controllers to your Apple TV.

watchOS 6 goes on its own journey by going app independent. There are also some new apps for Audiobooks, a built-in calculator, voice memos, and all new Watch Faces. We also discuss the updates surrounding health and fitness including cycle tracking for women and an all new Noise app.

Developers will have some big changes with Swift 5 and the all new SwiftUI and Combine frameworks. Also covered are bringing your iPad apps to the Mac, the new PencilKit framework, CoreML 3, ARKit 3, and the all new Apple Sign-In . We also look at the improvements to Xcode, Diffable Sources, Natural Language Framework, , and Core Data and CloudKit changes. 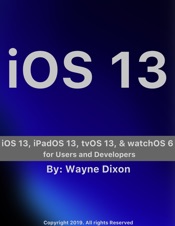