Countless studies have proven that over 90 percent of Trump-related news coverage is negative, and the percentage of journalists that identify as Republicans are in the single digits. When liberals are running the show, you can bet that their narrative has gone unchallenged. If you tell a lie long enough people will begin to believe it, and that’s certainly the case with so many liberal myths that have become accepted as conventional wisdom.

In this book you’ll learn, among many other facts:
What happened to non-gun mass killings when Australia enacted strict gun control.
The truth about “Scandinavian socialism.”
How Obama twisted the numbers to appear tough on immigration.
Why Mexico has stricter immigration laws than the US.
How Bill Clinton faked the “Clinton surplus.”
That the US doesn’t have the majority of the world’s mass shootings.
Why statistics claiming that illegal aliens commit fewer crimes than the general public are bogus.
The countless lies the media simply made up about the Trump administration.

If you’re in need of ammunition to shoot down liberal lies, this is the book for you. 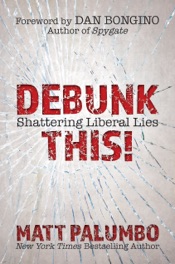