Twice Navy SEAL Curtis Lloyd has been ready to marry. Twice his bride to be has left him at the last minute for another man. So when a bride and her bridesmaid crash their car just outside Base Camp, in the biggest snowstorm this century, Curtis knows he has to get them to their wedding in Bozeman even if they have to walk the whole way. His motives aren’t entirely selfless: He needs a bride, too, in order to save the sustainable community he joined when he left the military, and feisty maid of honor Hope Martin is just the kind of woman he’d like to take to the altar.

Hope Martin has one job and one job only; get her chronically disorganized friend, Raina Wilkes, to the church on time. If she does, Raina’s fiancé has promised her an introduction to his best friend—the director of Yellowstone National Park. Raina’s dreamed her whole life of becoming a ranger at the prestigious posting, but there’s so much competition for just a handful of positions, she knows she needs an inside track if she’s ever going to score a job. So when a snowstorm spins her plans out of control, and the entire state of Montana shuts down, Hope has to make a choice: play things safe, and let her friend miss her own wedding, or put her trust in a handsome Navy SEAL who swears he can get them to Bozeman in just four days. A handsome SEAL who appears to have an ulterior motive.

Curtis soon learns he’ll have more than icy temperatures, deep snow and a bride with a penchant for getting lost to contend with. Hope has no interest in marriage—and views men in general, and him in particular with so much suspicion he’s beginning to lose faith.

Hope has never had to trust a man with her life before. Now she’s beginning to trust him with her heart, too. Can they beat their race against time? Or will they lose everything? 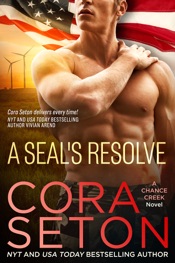