Navy SEAL Kai Green excels at many things, but picking suitable girlfriends isn't one of them. Now he has to marry within forty days or lose the sustainable community he's helping to build. He needs to find a bride, fast, and this time he has to get it right.

Addison Reynolds never leaves anything to chance. She's got a plan to take her from her boring job to an exciting career in New York City. Unfortunately, she's still years away from achieving her dream. So when her wealthy, model sister offers a chance to live in her penthouse apartment rent-free for a year, Addison is ready to do anything she says--including auditioning for the part as Kai Green's wife-to-be on the popular reality television show, Base Camp.

Once again Kai's thrown caution to the wind and followed his instincts rather than his intellect. What makes him think Addison is going to be a better match than any of the other women he's fallen for in the past?

Now that Addison is spending her days--and nights--in close contact with a handsome, smart, sexy Navy SEAL, it's hard to remember that her true goal isn't marrying Kai at all--it's winning the keys to her sister's amazing penthouse back in the city. 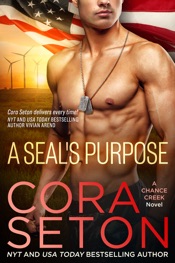