On the street, which was ankle-deep in discarded fast-food wrappings, I saw a woman who had pulled down her slacks and tied a pair of plastic breasts to her bare buttocks, while a man crawled after her on the sidewalk, licking them. At midnight along this street – with the sound of rock music pounding insistently out of club doors presided over by steroid-inflated bouncers, among men vomiting into the gutters – I saw children as young as six, unattended by adults, waiting for their parents to emerge from their nocturnal recreations.

The doctor and consultant psychiatrist Theodore Dalrymple looks at Great Britain - the nation which produced Newton and Darwin, Shakespeare and Dickens, David Hume and Adam Smith - and marvels at what it has become.

Its inner cities and council estates are places where 'the whole gamut of human folly, wickedness, and misery may be perused at leisure... abortions procured by abdominal kung fu; children who have children; women abandoned by the father of their child a month before or a month after delivery; insensate jealousy; serial stepfatherhood that leads to sexual and physical abuse of children on a mass scale.'

This timeless and beautifully-written collection of essays, looking at the collapse of the British way of life from an unashamedly conservative perspective, lays the blame squarely on the shoulders of the liberal intellectuals, who tend 'not to mean quite what they say, and express themselves more to flaunt the magnanimity of their intentions than to propagate truth.'

Life at the Bottom is full of insight, knowledge and mordant humour, and is a true classic by a great modern writer. 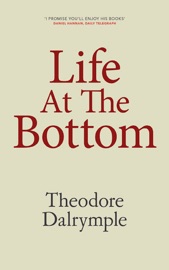